The beginnings of Munson Township

Munson Township lies in the south-central part of the county,
and has an area of 23,040 acres. The surface is chiefly rolling
prairie, but the meandering Sauk River adds a number of small lakes
and some larger bodies of water, namely Big Lake and the Horseshoe
Chain of Lakes.

Historical documents indicate that the first settlers where undoubtedly Herman Brunning and Joseph Young who arrived in the mid 1850's. The following year they were followed by four more settlers, and within a couple of years there was a marked increase in population.

This township was originally organized as Richmond, then later the name changed to Richardson and then later yet, to Munson. With the name of Munson Township which was officially organized in 1859, came the influx of residents and the need for some kind of formal schooling for the children. The first formal school was taught by Henry Klostermann during the winter of 1859-1860, in a log structure. The attendance grew rapidly and it wasn't long until more teachers were employed to help teach the many children. The first school was placed on the "state graded list" by 1903.

The 2010 US Census showed that there were 563 households, with a total township population of 1,466 people.

References from Stearns History Museum and US Census information

Munson Township was organized in May of 1859. Learn more about Munson Township at this website. http://stearnscounty.mn/townships/munson/ You can also find information regarding graves in local cemeteries at this site. 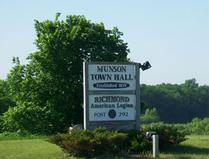